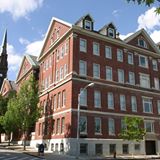 School reunion celebrations are an American tradition, especially the milestone years: ten, twenty, and fifty.  The big 5-0 is significant, as it is likely the last time you will see a good number of these classmates.  Mortality weighs in, and the seats at the "death table" increase.  Of about two hundred women, our committee members were able to gather information on one hundred and twenty.  The other eighty had either vanished or just didn't care to be found.  God forbid they should receive a letter from the Alumni Association asking for a donation to the Annual Fund. 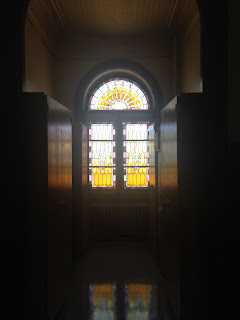 I had attended two earlier reunions, but wasn't sure I would attend this past weekend's events.  Having been retired for several years, my wardrobe had diminished to yoga pants and tee shirts.  In addition, those pants and shirts were a few sizes larger than the ones I'd worn back in the 1960's.  Several friends asked me to reconsider, so I bought a few new things to wear and sent in my check.  I'm glad I did, because it was a blast...and an endurance contest, the social equivalent of an Ironman competition.

We began with a cocktail party on Friday night.  It's odd that after so many years, some people were instantly recognizable, while others seemed virtual strangers.  Thank God for name tags.  Classmates with distinct facial features were often most recognizable.  The women with the good fortune to have inherited exceptional genes were recognizable, especially if they had stuck with a similar hairstyle or found a shade of hair dye that most matched their eighteen-year-old locks.  With others, you tried to hide the furtive glance at the name tag, and then squeal like you'd just located a long-lost cousin. 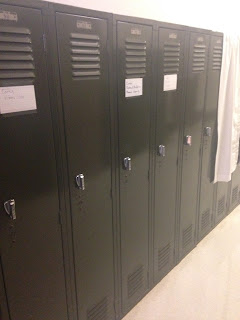 There were less of the "popular or nerd" cliques in the room as we circulated, careful to snatch a few snacks to minimize the impact of the wine.  No one wanted to repeat the scenario of that dance (or two), where we had to duck into an alley or bathroom.  We began to care much less about who held the most prestigious job, or rose the fastest on the corporate ladder.  Pictures of grandchildren circulated, and we reveled in having survived the traumatic events of our youth.  We were likewise relieved that we didn't have to keep the number of plates spinning in the air simultaneously that our own daughters and sons must.  The world has changed. 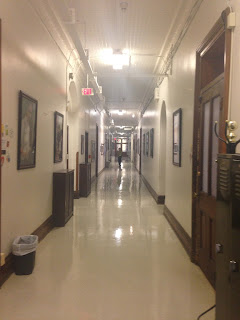 The second day, which included a luncheon at a local country club, was easier.  We had braved the sometimes critical eyes of  our classmates the night before - and this was particularly true for an all-girls' school.  We relaxed, ate, drank, forming and reforming tight little groups, remembering the crazy things we did and said, the detentions, walking in silent, single file to and from each class, how strict some nuns were, how hilarious some others had been.  We remarked on the excellence of our education and lamented how difficult it is to replicate today.  We gathered for a group picture.  One woman remarked that it was like 'herding cats', as we milled around, figuring out who was short vs. tall.

The next morning we gathered at our school.  The surrounding area was declining when we attended and hasn't improved much since then .  I thought of how the nuns would have been outside, sweeping up the litter that was cast down on the encircling sidewalk.  Mass was held in our chapel, as the adjoining church was no longer Catholic.  We strolled the multiple floors, up and down interminable steps and long hallways, making me regret having left my FitBit at home.  I could have sent that sucker into the stratosphere.  My feet could almost feel the saddle shoes that were a part of our uniform so long ago.  The spirits of the nuns permeated the halls, all of them gone now, except for one last holdout who leaves next week.  The upper floors - where the nuns lived - were eerily dark, and the rooms alternately empty or used for storage of old desks and assorted furniture.  It had been converted from convent to infirmary as the number of the religious dwindled.  We heard the echoes of our adolescent cheers in the old gym, the site of basketball games and St. Patty's Day festivals where we spun prize wheels and paid for chances to win insignificant prizes, all to raise money for 'the missions'.  I still don't know what those missions were, but we willingly forked over our nickels for games and treats, paying to vote for a 'colleen' who ruled for a day. 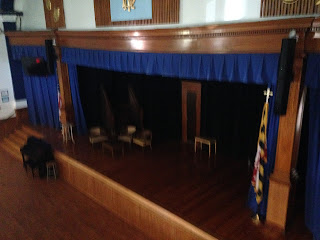 We laughingly recalled our Health classes with the school nurse, Miss Apicella.  She was a short, Barbara Milkulsi-esque Italian nurse who taught what passed for Hygiene and Sex Ed in the Sixties..  The ghost of Miss Dietz rubbed our faces with tissues, searching for any trace of makeup.  The School Sisters of Notre Dame knew that the use of cosmetics was a sure sign of a slut.  The rows between our desks were patrolled regularly for evidence of roots showing on either side of our parted hair.  If any were spied, you were not only a slut, but quite possibly a harlot.  That raised the possibility that you might have been working nights at the Two O'clock club on Baltimore Street. 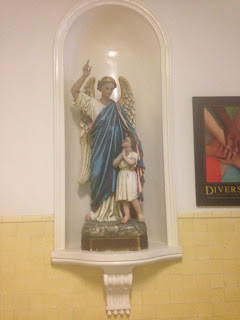 As the reunion parties neared their end, any initial cattiness had dissolved.  The charity, loyalty and kindness that the nuns had instilled in our souls had reurfaced.  The random unfairness of life left numerous marks.  Some had endured more than others:  disease, death of a child or other family members, and other arrows of Fate had visited our circle of survivors.  We looked past the wrinkles and extra pounds to see the young women we had been as well as the strong, accomplished women we had become. We mourned the dramatic drop in enrollment. 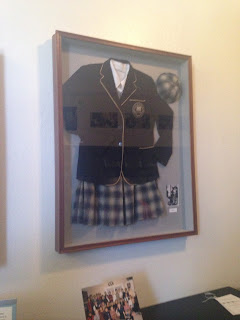 There was a new type of room, filled with the history of our school, but too small for an institution that has stood since the 1840's.   Our hope for the future is that this room will expand and encompass the stories and histories that are yet to be.  The Institute of Notre Dame is a treasure that Baltimore should not let slip through its fingers.  Hail to thee, alma mater.

Posted by Kathleen Barker at 6:19 PM