Goodbye and Good Riddance to 2011

As the year 2011 draws to a close, lots of people struggle with a list of resolutions for the new year.  Not me.  I never keep them and believe them to be a colossal waste of time and effort.  Instead, I offer you my hopes and wishes for the coming year.  These too can be yours.

To the person who rearranged the lawn ornaments:  you have an admirable sense of humor, but I wish you won't force the Virgin Mary to cradle Frosty the Snowman next year.

To the people who carry signs announcing the end of the world, please tell me it's just because you've maxed out your credit cards and are hoping you won't have to pay them.

To the guys who offer to spot their weightlifting buddies at the gym....don't do it if you're not wearing underwear under those gym shorts.

I wish someone would confirm or disprove for me once and for all whether all Jewish people go to Chinese restaurants on Christmas.

I hope that no one pepper sprays me at next year's Black Friday sales.  Oh, I forgot....I shop online.

I hope someone gives me a pair of pants like the Incredible Hulk's.  Even when he goes through the change, they still fit.

I wish someone would explain why I'm not allowed to smile for my passport photo.  Am I more recognizable when I look like a mental health facility resident?

I'd like someone to explain "Bronies" to me....men who collect My Little Ponies.

I wish I could go to whatever qualifies as driving school for people who ride around on elephants.

Just once, I wish I could ride on an airplane next to a man who doesn't splay his legs out at the knees and invade my pitifully small amount of space...and then have digestive problems.

Convince me that always-happy people aren't on anti-depressants or some other kind of medication.

Explain the difference between an atheist and a bitter Catholic.

Find the one kid who actually likes getting those miniature boxes of raisins for Halloween.

Explain why anyone in their right mind would ever watch a soap opera.

I hope to walk into the local Dollar Store and ask, "What's the most expensive thing in here?"

Identify the person who decided that apple pie would go well with a piece of cheddar cheese.

I wish people would stop telling me to not be so judgmental.  How else am I supposed to feel better than everyone else?

Bring back the 60's and 70's.  Sex, drugs and rock 'n roll were all considered normal.  Now when I meet guys, it means they take high blood pressure, high cholesterol and diabetes medications while listening to oldies music.

Tell me you really believe that "bottled water from real glaciers" stuff.

And, finally, I hope I don't have to come up with another list like this until next year.  Happy 2012!
Posted by Kathleen Barker at 5:31 PM 2 comments:

Rock On, Barbie...You've Got Tats?

For a 52 year-old chick, Barbie has a helluva knack for reinvention.

Ruth Handler, co-founder of Mattel, was inspired to both name and create the three-dimensional fashion doll in 1959 after watching her own daughter, Barbara, play with paper dolls.  Her first outfits were the iconic black and white bathing suit with hair in the classic ponytail.  In the 1960's her styles morphed through the Camelot and then Flower Power years.  Is it a coincidence that she gained bendable legs during the Age of Aquarius?

During the 1970's, Barbie had a resculpted face and constantly changing wardrobe and hairstyles that swung from Mod to High Fashion.  The fitness craze and career woman phase in the 1980's gave her leggings and a credit card.  The first Barbie doll convention took place during this decade as adults became avid collectors.  Girls can now use their computers to design and print Barbie fashions.

But things haven't been all glamour for our wasp-waisted, outsized plastic boobs American classic.  She's long been criticized by womens' groups for her unrealistic body image.  And now, Barbie is sporting pink punk hair and tattoos.  Parents are in an uproar.  The streets run red with the blood of outraged rioters, crying for the downfall of an "overly-sexualized, inappropriate" doll.

Get a grip, people.  The Tokidoki Barbie is a collector doll, intended for adult collectors.  She sports dyed pink hair, rock fashionista clothing and tattoos on her chest, neck, arm and back.  Critics who self-righteously rail against the doll as a way to 'play on young girls' natural desire to appear older' are missing the point.  The doll was produced in limited quantities for collectors.  Sure, you can still plunk down a cool $378 from a seller on Amazon to procure one, but it was never marketed or intended as a way to foist prostitution as a viable occupation for young girls. 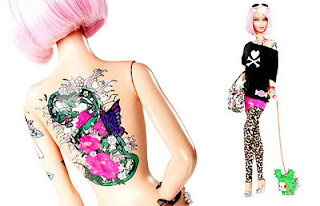 And since when is a plastic doll a role model?  Why not a pregnant, pro-life Barbie? Where is Jihad Barbie?  How about Divorced Barbie...she'd cost twice as much, but would come with Ken's house and car. If this Barbie is 'overly-sexualized' because she has tattoos and pink hair, why is it okay for her to wear bikinis and gowns with plunging necklines?

Personally, I'd be a lot more concerned about the fact that Tattooed Barbie has a small dog in a cactus suit named "Bastardino".  Now THAT is something to worry about!
Posted by Kathleen Barker at 6:11 PM 4 comments:

Coming Soon to a Urinal Near You!

A trip to the Ocean City, MD boardwalk, the State Fair, or an amusement park with my granddaughter usually involves at least one round of the water-fueled horse race where we point our guns at a small opening in hope of winning a twenty-five cent toy in exchange for the six dollars we paid to play.  Somehow I never made the connection between this carnival game and the “We aim to please, so please aim” sign that compulsive-cleaning friends place in their powder rooms.   That’s one reason why I’ve yet to hit the million dollar mark in personal income.
But now a British company HAS made that leap and installed video games in the men’s urinal at a English pub.  They say these are the first “hands free” games (thank goodness), but I’m not sure I understand the reason behind this invention.  Is it intended to make peeing so much fun that pub patrons will drink even more beer to increase the frequency of their visits and, therefore, the number of games they can play?  Someone has figured out that It takes an average of 55 seconds for guys to whiz in and out of the loo.  That means they can insert a short advertisement before the game’s graphics begin to stream.  Players can choose between a ski simulation, trivia, and a penguin shooting gallery.  Is it supposed to reward the man’s aim accuracy with more points and thus less clean-up?
Once this catches on…..and it will….are competitive games far behind so guys can compete with their friends?  Pee-pong, urine-controlled versions of skee ball, space invaders, pac-man and donkey kong are on the horizon.  Just like the awe-inspiring classmate who could burp out the entire alphabet, the porcelain crown awaits the guy who can sustain his stream the longest.   And will it stop at the urinal or are new and more ingenious games just waiting to spring up for patrons seated in the stalls?  The bathrooms may become more popular than the seats at the bar.
Then, just like the playground monkey bars of yesteryear, the games will disappear…falling victim to discrimination lawsuits filed by older male patrons with prostate issues, unable to reach high scorer status.   Let the games begin.
Posted by Kathleen Barker at 6:35 PM 6 comments: