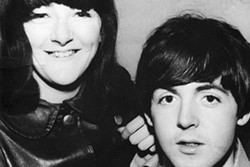 She flew through the hallowed halls of Baltimore’s Institute of Notre Dame, waving black-and-white Polaroid pictures for just one dollar each.  Where else could you get a personal memento of The Beatles U.S. debut on “The Ed Sullivan Show” on February 9, 1964?  Kathy McCabe was a promoter while still dressed in the pleated plaid skirt and saddle shoe uniform of IND, before she even knew what that term meant.  And she was absolutely crazy over this new group from Liverpool, England.  She LOVED music…so much so that she was almost expelled from the all-girls Catholic school for an in-school performance.  We sat through lots of performances during our time at IND:  choral groups, drama club, etc., but never had a student dared to put on one like Kathy did.  The curtain drew back to reveal (GASP) a group of girls performing a Beach Boys’ number, with Miss McCabe hammering away on a set of drums.  The principal rushed to the stage, her black veil flying behind her, and shut down such an affront to womanly decency.

If you happened to stop by the gathering place for local Baltimore music in the mid 1960’s and 70’s – The Bluesette – you’d have seen her, decked out in hippie chick garb, singing with The Uncertain Things band and elsewhere for over thirty years.  Time moved on, and many of us re-directed our youthful passions, but not Kathy McCabe.  I caught up with my former classmate recently and discovered that she has indeed continued to do what she always loved. 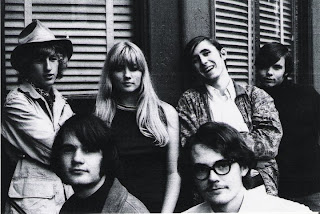 Her talent for picture-taking extended far beyond those Polaroids, too.  She is an award-winning photographer, who has worked as a publicist and manager, a music video and album producer, a recording studio manager, and a publicist and marketer for “Pelada”, a documentary film about pick-up soccer games around the world, far from the manicured fields of professional sports.  After making the rounds of about 30 film festivals, it was picked up by PBS and Netflix.  You can check “Pelada” out at pelada-themovie.com.
Kathy also happens to be an expert on all things Beatle.  If you are wondering what good it does to know everything there is about the Fab Four, well pull up a chair…

McCabe has initiated, engineered and produced a documentary film about the Beatles’ long-time, faithful secretary, Freda Kelly, a shy teen who jumped at the chance to be their secretary.  The film’s name comes from a shout-out on the group’s 1963 Christmas record.  The story of the four lads who became a huge and lasting success is told through Freda’s eyes.  She was a friend and confidant to the group and their families.  She was the head of their fan club for eleven years, dutifully responding to fan mail and unending requests, holding down what had to be one of the most enviable jobs on earth.  Freda wrote an article each month in a magazine called (what else?) “The Beatles Monthly”, and Kathy always bought a copy at Sherman’s Bookstore on Park Avenue in downtown Baltimore.  There was a pen pal request page in the magazine and Kathy added her name to the list.  In a serendipitous twist of fate, McCabe’s name was chosen by a fellow named Robbie Malloy, whose sister happened to work at the Beatles Fan Club with Freda.  The brother-in-law of Robbie’s sister was named “Billy”.  Billy (who appears in the documentary film) just happened to play for the Merseybeats, who played on the same bill with The Beatles many times.  Over the years, Kathy and Freda developed a friendship which led to the making of this film. 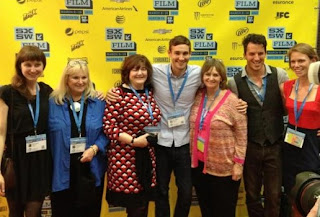 Kathy McCabe’s ties to Maryland run deep.  She was born in Baltimore, and is a graduate of both the Institute of Notre Dame and Towson State, with degrees in both Political Science and History.  She divides her time between Catonsville, Maryland and Gulf Shores, Alabama.  An avid wildlife photographer, Kathy travels regularly with her musician husband, Mac Walter, who just happens to be (among MANY other things) a member of the Governor Martin O’Malley’s band, O’Malley’s March.

Don’t wait, because these screenings have been selling out to appreciative audiences at film festivals across the country for the last two months.   It’s impressive enough that Magnolia Pictures has acquired the distribution rights for North America.

#1 Screening: Get out of work early & come to the movies.
Bring your friends, co-workers and boss too!
Tickets $10
The Link to purchase tickets is http://www.missiontix.com/events/product/17331

#2 Screening: Bring your mom, wife, aunt, daughter and family for Mother's Day!
Why sit in a crowded restaurant at noon when you can have fun at the movies?
Tickets $10
Sunday, May 12, 2013 at 12 noon at MICA Brown Center, Maryland Institute College of of Art,
1300 Mount Royal Avenue
Baltimore, Maryland 21217
The link  to purchase tickets:
http://www.missiontix.com/events/product/17332
Posted by Kathleen Barker at 11:25 AM 3 comments: