Closer to the Edge

Since my mom passed away a couple of weeks ago at the ripe old age of 95, I've experienced a strange mix of emotions; sadness and grief, because I will miss her, and relief, as I know her quality of life was low.  Deaf, wheelchair bound, and episodic dementia is a sad extension of a purposeful life.  She was ready to go, and died peacefully in her sleep.

Born on her grandparents' farm in then-rural Maryland in 1917 - just 14 years after the Wright Brothers flew the first successful airplane and 5 years after the sinking of the Titanic, she and her three siblings experienced great chunks of our country's historical events.  The U.S. entered World War I just six months before she was born.  She was 12 years old when the Great
Depression began.  The Dust Bowl's seven-year reign began when she turned 14.  World War II began when she was 24.  With children two and six years old, she said goodbye to her husband when he was drafted during the Korean War.

She saw the development of the television set.  Sputnik was launched when she was 38 and the race to the moon was on...the same year that Rosa Parks refused to give up her bus seat.  At 44, she saw the Berlin Wall constructed.  After that, the Vietnam War, the Civil Rights Movement and the tumultuous decades of the 60's and 70's became something my parents tutt-tutted about with their friends while it became part of my own tapestry.

What I didn't expect to experience after her passing was a deepening sense of my own mortality.  As long as she was alive, she was my shield against the void of death.  Her very existence was a reassuring barrier, a little Dutch child plugging the leak in the dike.  My brother, my only sibling, died two years ago, and my dad has been gone for 13 years.  I am the sole survivor of my original family.

Independence has always been important to me, and with children, grandchildren, cousins, nieces and nephews, I'm rarely lonely.  But I can't shake the feeling that I'm next in line.  It's the nature of things and I accept it.  It doesn't mean I have to like it. 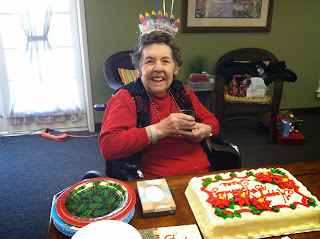