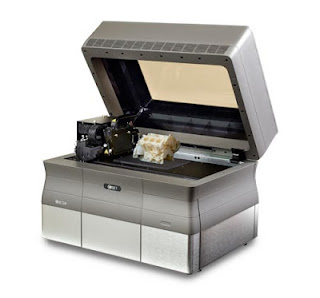 If you haven't seen a blurb on the news lately, brace yourself.  We are on the cusp of an industrial revolution, the likes of which hasn't been seen since the invention of the computer (thanks, Al Gore).  The invention known as a "3D Printer" is about to make untold numbers of jobs obsolete.  Remember how all those autoworkers slaved away on assembly lines until the robotic assemblers took over?  Automakers are already using the printers to make some parts and components, but they are just a small way to utilize this technology.

Scientists at Cornell University  recently created a new human-shaped ear using a 3D printer and injections of living cow cells. The researchers are on track to use a person's own cells to quickly customize implants.

Remember dental labs that employed skilled technicians to create caps and crowns to mimic those lost to decay or accidents?  A printer can create exact replicas.

How about the laborious procedure of securing organ donors for transplants, and the percentage of recipients whose bodies often rejected the donated organs, despite ingesting a boatload of anti-rejection drugs for years?  We aren't far from using a patient's own cells to replicate the needed body part.

Engineers and designers have been using 3D printing to create prototypes for many years, but falling technology costs are making it increasing accessible to other people. 3D objects are created by sending a digital file or scan to a printer which then builds the item layer by layer - a process know as "additive manufacturing".

The fashion industry is experimenting with these printers to produce clothing and jewelry.  Think of all the workers this will jettison when they perfect the process. Architects are confident that the process can be used to build an entire house.  Lots of construction workers won't be happy about that.

These days, restaurant meals aren't able to be customized much more than to hold the dressing or to cook the meat medium-rare.  But 3D printing technology will be able to tailor foods to specifically suit an individual’s dietary needs or calibrated to the calories burned that day.  Data-driven food is destined to make up a much larger part of our diet in the years to come.  And you were worried about GMO's?


"Once you have the automatic collection of what you’re eating and when, you can predict -- based off your activity levels, your planned diet and your health records -- exactly how much and what types of food you should be eating. That’s really ultimately the long-term potential of food printing," explained Jeffrey Lipton, a doctoral candidate at Cornell University’s Creative Machines Lab and chief technology officer of Seraph Robotics.

Cornell also has a Fab@Home lab, which is focused on personal fabrication,  They formulated a recipe for snowflake-shaped sugar cookies.  These data-driven delights were a result of compiling Lipton's and another colleague's information such as height, weight, daily schedules, BMI and caloric deficit for the day.  They used 3D printers to print two cookies that each accounted for 10 percent of their respective deficits. 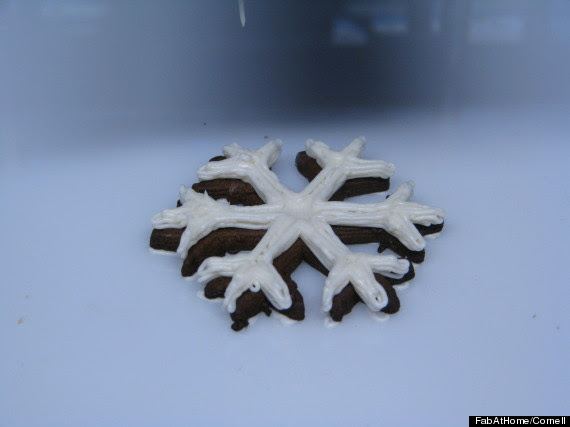 And if this sounds too far into the future for you, Lipton noted that four publicly-traded food companies have 3D printers they’re using to prototype new foods.

So how long, really?  Well, the cost of 3D printing is still too prohibitive for use in producing mass-printed food.  Novelty items like birthday cakes and chocolates will likely be the first food areas to utilize the technology.

In fact, NASA has announced plans to fund construction of the world’s first ever 3D food printer, and has already given a $125,000 grant to mechanical engineer Anjan Contractor, who has designed the machine. NASA hopes to eventually be able to provide food for astronauts on long space journeys.

"We eventually have to change our perception of what we see as food." - Mechanical engineer Anjan Contractor

Some say this is just as exciting for the earthbound, as the machines could eventually become a regular kitchen appliance used to simply print off one's dinner rather than spend time preparing it.
The food printer is fed on cartridges of powders and oils (instead of ink) containing all the nutrients needed for a healthy diet.  The ingredients are sprayed on layer-by-layer by the 3D printer, eventually creating solid three-dimensional food.  Enthusiasts claim the printers might cut food waste globally, as the cartridges wouldn’t go out of date for over 30 years and could only be refilled when they had completely run out.

Gee, I guess we wouldn't have to worry about such silly things as freshness or "use by" dates.  Makes you wonder how our bodies will react.  Personally, it's a bit too "Soylent Green" for my tastes.

But food is only one avenue of the 3D printer revolution.  You probably saw the news piece on television where a group of American anarchists created a 3D printed gun and published the designs globally, allowing anyone with a 3D printer to create a firearm.  The design has been downloaded hundreds of thousands of times, but at least -to date-the device can only fire a single bullet.

Home 3D printers with limited functions can be had for as little as $300, thanks to one Kickstarter campaign, but the industrial models are out of reach for the individual.

What would you use one for?