As I watched the horrid news of yet another massacre of innocent people, I wasn't surprised to read that the accused gunman found it all too easy to obtain his weapons.  In fact, we all may have subsidized their purchase.  Before he withdrew from the doctoral program he was enrolled in, James Holmes' financial aid included a $26,000 annual stipend for living expenses.  He reportely acquired his guns, ammo and tactical garments legally.  And I can personally attest how easy it is.  I went online and was able to order both weapons and anmunition without any type of background check or permit requirements.  There are even assault rifles for sale or barter on craigslist.

At the risk of bringing the Second Amendment wingnuts out of the woodwork, I'll just state my opinion.  The right to bear arms, whether for hunting or personal protection, should not include weapons like grenade launchers, assault rifles, or other explosive devises whose only purpose is to wound or kill multiple living targets.  I understand that they can and should be used by the military, but I see no reason for civilians to possess them.

I'd be willing to bet that you'd be hard-pressed to find a friend or family member of a victim murdered by gunshot who opposes gun control.  The "controls" we have today are laughable.  How long will it take before we restrict ownership of at least the rapid-fire weapons for which there are no plausible reasons to own?  And, I'm sorry, but the Zombie Apocalypse doesn't qualify as a valid reason.
Posted by Kathleen Barker at 4:48 PM 1 comment: 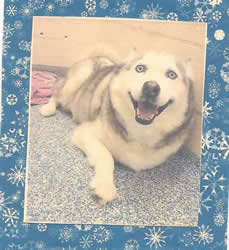 Losing a much-loved pet is never easy.  I knew this from experience, having lost two other dogs in 2006.  Even though, as a rescue, he'd lived with me for just 5-1/2 years, we managed to bond on a deeper level.  He'd been treated poorly, possibly abused before I found him, trusting no one.  I took about 18 months before he warmed to me, finally climbing onto the sofa to curl up against me while I wrote on my laptop.  The cat learned to live on the second floor to avoid being hunted on the lower level.  Whenever I traveled, he stayed at a local veterinary kennel, much to the staff's delight.  He was a favorite, with his dense, grey-and-white, double-layered  Malamute fur, ice-blue eyes and smiling muzzle.

While on a trip to Birmingham, Alabama about six months ago, he survived a near-death health crisis which responded to several medications.  I wrote a blog entry, worried that he might not survive.  As the months passed, I grew hopeful that we would be able to manage his illness, despite the expense of the prescriptions.  He began to climb the steps slowly and sleep more until one evening recently when he couldn't keep his dinner down.  Anyone who has a dog knows that they occasionally manage to eat something while on the daily walks that upsets their system, so I wasn't too worried at first.  But by the third day without eating and the frequent potty breaks, I knew it was time to get help.

The young vet was sober after the blood work and x-rays, obviously not wanting to deliver the news:  his liver was enlarged and the mass that we hoped was benign had grown markedly.  He was in distress and surgery wasn't likely to save this 12-year-old pooch.  So I made the decision that I'd dreaded.

His death was by appointment and I didn't want him to spend his last night in the kennel.  I brought him home for his comfort and mine, and so my seven-year-old granddaughter would have a chance to say goodbye.  After sleeping on the floor with him that night to make sure he was reasonably comfortable, I fed him a sirloin steak as his death row meal, which he ate with great relish.  The seven-year-old insisted on being present during the procedure, so with her mom's permission, she accompanied him on his final journey, stroking his fur and murmuring her love as his eyes dimmed.

It's been over a week since that day and she seems to have adjusted after several days of tears and a week of gymnastics camp. She insisted on purchasing several helium-filled balloons to send a laboriously-created love note to doggie heaven.  My own healing progress has been hampered by both physical and mental reminders of my animal friend.  I'd been trained by habit to respond to his needs and it's difficult to switch off.  After locating the toys and bones scattered throughout the house, washing and storing the bowls, leashes, and collars, I have to catch myself.  Whenever I'm gone for a few hours, a mental reminder rings that I need to go home to take him outside.  When I sleep late, I wake up with a start, thinking he needs to be walked.  I keep checking to be sure he has water.  I save the plastic grocery bags for lawn clean-ups that won't happen.  When food is dropped onto the floor, I have to remember that he's not here to automatically scarf it up.  I felt almost disloyal, cleaning his profuse sheddings from the rear car seat and releasing them to the wind.

Although I half-heartedly browse through petfinders.com, it's far too soon to consider adopting another dog.  It would seem like marrying on the rebound after the death of a spouse.  But the house is too quiet.  Bebe, the cat, is still sure that Bullet is around somewhere, waiting to pounce, so she remains in now self-imposed exile upstairs, venturing down to the sofa only at night, when she's sure he's asleep.

Thankfully, I have several trips planned that will help take my mind off of my "Hairy Potter's" absence.  They will take me through to the end of summer.  When the weather cools and I pull a coat out of the closet, I'll think of him again as I reach for the sticky-taped, pet hair roller.  Some things will never change.

Thanks, Bullet, for over five years of love and companionship.  I hope you enjoyed the ride.
Posted by Kathleen Barker at 9:41 AM 3 comments: