LIFE ON A STRING


Several months ago, I attended a unique marionette show with my daughter and granddaughter in Los Angeles, California.  It reminded me of a show I watched on television a long time ago…

If you were a kid in the 1950’s, you were likely a witness to television history.  What began as a radio program known as “The Triple B Ranch Show” with a character named Elmer who greeted listeners by saying “Howdy Doody” soon became “The Puppet Playhouse”.   By 1949, the circus theme was changed to a cast of characters who lived in a town called “Doodyville” hosted by a man named Buffalo Bob.

By now you’ve probably guessed that this was the nascent “Howdy Doody” show, which was a true pioneer in several ways.  Although it began in black and white, it was the first television show broadcast in color, the first NBC series to air five days a week, and the first show with more than 1,000 continuous episodes.   During its 13 year run, a total of 2343 shows had been performed. 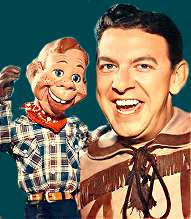 While most people today think of puppets in terms of the handheld variety, these were marionettes – puppets on strings.  Once called the ugliest puppet ever made, Howdy was joined by others such as Mr. Bluster, Flubadub (who was comprised of seven different creatures) as well as human characters.  Aside from Buffalo Bob, you were sure to see Clarabell the clown, Princess Summerfall Winterspring, Chief Thunderthud, Ranger Bob and Trapper Pierre.  The first Clarabell  was none other than Bob Keeshan, who went on to become TV’s Captain Kangaroo.  Ranger Bob was the second acting job for soon-to-be Star Trek’s Captain Kirk, also known as William Shatner.  Trapper Pierre was Camelot’s Robert Goulet.

As more updated shows such as the Mickey Mouse Club took away an ever-larger share of Howdy’s audience (known as the Peanut Gallery) and sponsors gradually jumped ship, the show ended in 1957. 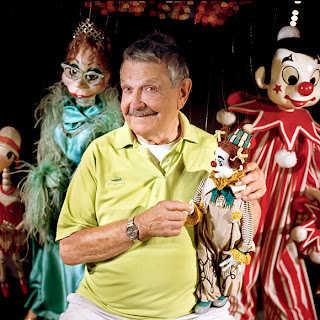 Although Howdy and his friends faded away, the show that brought it to mind has not.  Underneath a bridge in a gritty area next to downtown Los Angeles is a white building that is easy to overlook.  An 88 year old man still shows up for work nearly every day.  Bob Baker lives in the same house that he did when he pulled the strings of his first marionette at age seven.  It was a Christmas show at an L.A. department store that lit his passion for puppetry.  He was just eight years old when he performed his first puppet show at the Beverly Hills Hotel.  In the audience were members of the famed Rockefeller family and when the children came up to hug the puppets at the show’s end, Baker knew he had found his life’s work.


Baker helped unionize puppeteers and established the first puppet manufacturing facility when he was still in his teens.

His theater is the longest running puppet theater in the United States and houses over 3,000 puppets.  But the theater is struggling financially as attendance has fallen over the last decade.  Baker still presents seasonal productions throughout the year.

The day we attended the show, we entered a large room with no stage , bordered by folding chairs.  A colored line ran around the perimeter of the room, outlining the no-go areas for the audience.  The two-year-old sat, entranced, as music poured from the speakers and the curtains pulled back to reveal a myriad of marionettes representing animals and people.  The puppeteers dressed to avoid distracting from the puppets, and Baker’s creations danced, hopped, and strolled around the room, interacting with the children.   Delighted by the personal attention, kids laughed and joined in the fun.  Set, character and costume changes kept up the interest level during the hour-long presentation.

It’s easy to see that Baker and his puppeteers are doing this for love, not money.  The costumes and sets are well worn and even a bit shabby, but the kids didn’t notice.  They were too happy, watching the last days of one of Los Angeles' cultural and artistic giants, Bob Baker.