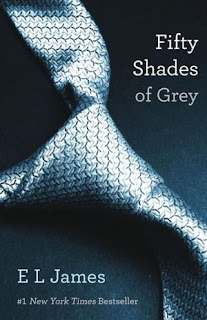 After seeing several online postings and a segment of NBC's Today Show, I decided to see what all the buzz was about E.L. James' work of fiction, "Fifty Shades of Grey".  I almost didn't buy it because it ticked me off that the Kindle download was more expensive than the paperback edition.  After a few days of principled chest-beating, I caved and spitefully bought the less expensive paperback, especially when I saw that I could recoup nearly all my money by selling the carefully-read novel on Ebay.  The price differential wouldn't have bothered me so much if it were just one book, but this is a trilogy. And given what I'd heard about the book, I preferred the comparative anonymity of my Kindle if I were to be seen reading it in public.

Reading the book in public turned out to not be an issue.  I sat down to read about 7 p.m. a few evenings ago and read non-stop until I finished the 600+ page book around 8 a.m. the next morning.  Reading marathons don't strike very often in my household.  I'm quite embarrassed to say that the last time that happened was when I got hooked on the four-book "Twilight" series, and I came close to it on the "Hunger Games" trilogy, reading all three books in a week..

What kind of story sucks a reader in so completely that she abandons the siren song of blissful slumber?  Uhhhh, well, frankly....sex (she says as she looks at the ground and scrapes shoe distractedly).  It's not that the writing is great.  If the main character - who has been dubbed the "S&M Cinderella"-uttered the words, "Oh my" or "Wow" one more time, I was going to punch her.  The descriptions become repetitive.  How many different ways can you describe one of the most basic human behaviors?  Despite its shortcomings, the soft porn novel has hit the New York Times Bestseller List with a vengeance.  It has allowed millions of women to eagerly wait for the brown cardboard box to hit their porch.   And only the order fulfillment folks at Amazon know.

The story is so blush-worthy that the author herself was extremely self-conscious while giving a televised interview.  And why, in the post-feminist age of independent women, is a narrative that extols the seduction of an innocent college student by a twisted, young billionaire so enticing?  I'm afraid I don't have the language skills to explain that and have it still be printed here.

I can only say that if men want an advantage when it comes to picking up women, they have an extra weapon.  They need not restrict themselves to the gyms, the Whole Foods aisles or the bars in Fells Point.  All they need to do is head for the nearest bookstore, cafe or coffeehouse and find a woman with her head buried in one of these books... or wait for the upcoming movie.  You're halfway home.
Posted by Kathleen Barker at 7:41 AM 7 comments: