Today's piece is a re-post from the January 7, 2015 blog of my guest, Regina Sokas, who is a fellow member of a Facebook group called "Justice for Catherine Cesnik and Joyce Malecki".  It exists to keep alive the investigation into the 1969 murders of Sister Catherine Ann Cesnik and of Joyce Helen Malecki, cold cases which may have the same perpetrator, and which have commonalities of location and who the victims knew, including Father A. Joseph Maskell.

In a sense, it was the perfect storm of evil intention and opportunity. The man was Chaplain at an all-girls Catholic high school, for a time the only male in the administration or faculty, the lord over a group of nuns from the School Sisters of Notre Dame, led by the soft-spoken Sister Mary Virginia.

As a student, I knew nothing about the adults in charge of my days. Like a perfect Freudian analyst, each remained a blank canvas upon which I could project my own thoughts. For example, I imagined that Sister Mary Virginia came from a family of some prominence with social and financial standing in their community. She had a rarefied air, like she stepped over or around the more tawdry elements of her job.

I don't remember ever having a one-on-one conversation with Vice Principal Sister Nancy Cavey, much to my relief as I projected upon her a rather ruthless, militaristic persona. I imagined that she came from a place where people learned that life was unfair, that resources were limited, and that if you had to step on someone else to get ahead...so be it. If Keough High School had ever instituted a Hunger Games, she would have organized it.

Sister Judith, on the other hand, I spoke to on far too many occasions in her role as Dean of Students (i.e. Dean of Discipline). It was her job to ream out wayward students. I was just irritatingly rebellious enough to come to her attention. The critical difference between her and Sister Nancy was that Sister Judith didn't really seem to relish inflicting pain. Sister Judith seemed, for lack of a better description, normal.


Two of the administrators on the 1970 Aurora yearbook page don't ring a bell with me at all. Then there was the Chaplain (lower middle), Father A. Joseph Maskell. Did I sense that he was evil? Probably not, since evil and priest were a combination not yet familiar to me.

I avoided him like the proverbial plague, but that might be simply because I had arrived in high school with a keen mistrust of all authority figures already in place, although my early nemeses were mostly nuns. If I heard any whispers about him, they were faint. I didn't need much urging to stay out of his confessional.

Eventually defrocked, albeit decades and decades after he abused multiple young girls, my sole interactions with Father Maskell's office were acts of minor pranking of which I should now, as an adult, be ashamed, but of which I am instead absurdly proud. Then again, he has shown himself to be a rapist and, most probably, a murderer.

In one sense, Sister Catherine Cesnick disappeared for me the summer before my senior year of high school when she did not return to teach at Keough. She and another young sister had moved out of the convent into an apartment and were teaching at a public school. We weren't close. In fact, I kinda didn't like her, but then again I had that whole authority figure issue.

When she disappeared in November of 1969, it was publicly blamed on her stopping to shop at the Edmondson Village Shopping Center.

That this looks now to be a lie is only the first sin, although a grave one. Edmondson Village had been the site of a shady real estate practice called blockbusting -- a way to stimulate white flight and make a buck by buying low from the white population and then selling high to the incoming black population. Falsely blaming Sister Cathy's disappearance on the Edmondson Village Shopping Center was a variation on the-strange-black-guy-did-it and capitalized on fears stoked during the riots that had taken place the previous Spring following Dr. Martin Luther King's assassination.

The mysterious black guy didn't do it, of course. It now appears that Father Maskell did. How did he get away with it? That's where evil really had a field day. You see, Maskell had a part-time gig as a police chaplain. Let me spell it out: Rumor back in the day was to avoid going to confession with Maskell as he somehow violated the oath of the confessional. Hints were that he used blackmail. I now believe that he did use his position to identify naive and devout girls who might be more vulnerable to his abuse.

Now add to this that he used his position as chaplain to the police to once again corrupt the sacraments -- this time in order to identify those police officers whose morals aligned with his own rotting soul. A group of unrepentant enforcers, if you will, who raped at his direction. You can read more of the details in Inside Baltimore.

I wasn't there. Isn't that what people often say when faced with so-called "he said/she said" situations? I was there in the building. I had the faintest inkling that something was not kosher about the chaplain. I didn't know the truth.

Sister Cathy knew the truth, because she was told. She promised that she would do something about it. Shortly after this conversation, she disappeared. Two women who were girls at my school during the years I was there have come forward and told police, told a reporter, told a court, told us all that they were shown the body by Maskell and his police coconspiritors. 'This is what will happen to you if you tell.'

Maskell was defrocked, eventually. He is now dead. If there is a hell, he's stoking the fires. His law enforcement accomplices have yet to be identified, although some of their colleagues are willing to anonymously speak the truth. (See the link above.)

I believe my fellow students. I believe the anonymous police officials. I believe the decision by the Catholic Church to finally defrock him. I wish I knew who knew, how much they knew, and when. I probably never will.

For what little it is worth, I want to go on record to my former classmates and say, I believe you. I stand beside you. I hope someday you feel justice, but that hope is faint because justice is elusive and often bows to power. It is difficult to name two more powerful organizations in Baltimore than the Catholic Church and the Baltimore Police Department. Solidarity can have power, too. It is power of a different, more spiritual, force, but it is real. I join my power with yours. Heal, my Keoughites. Speak your truth with healing. Amen.

and of Joyce Helen Malecki:
http://www.websleuths.com/forums/showthread.php?t=221570

Court of appeals opinion in the sexual abuse case of JANE DOE, ET AL. v. A. JOSEPH MASKELL, ET AL.
http://www.courts.state.md.us/opinions/coa/1996/102a95.pdf
A further appeal was made in 1997 to the US Supreme Court, which refused to hear the case.

"God Only Knows," an award-winning 1995 Baltimore magazine article which covers the trial and looks in depth at Maskell's biography and also the larger issue of clergy abuse. Download from the "Nonfiction" section of the author's web site: http://www.paulmandelbaum.com/bio.htm

Many Baltimore Sun articles about Maskell, most easily accessed with a Google search:
http://www.google.com/search?q=cesnik+maskell+site%3Abaltimoresun.com
Posted by Kathleen Barker at 7:25 AM 19 comments:

When a new movie that is based upon a book hits the big screen, do you watch the movie or read the book first?  The chicken-or-egg process of a good story likely evokes a moment's hesitation. My own answer? It depends.

Unlike many of my bookaholic friends, I do not keep an eagle eye on the New York Times bestseller list. My never-ending to-read list comes from a select group of guinea pig acquaintances who have given a book a big thumbs up.

Don't get me wrong. I love a good movie too, but it's rare to find one that captures the images that my mind has conjured from the book that it is based on. Usually films have difficulty compressing the story satisfactorily into the 90-120 minute attention span of the average movie audience.

Recently, I had two completely different book vs. movie experiences. The first evolved from a former classmate and Facebook friend who raved about a book that involved a historical romance AND time travel. Normally I hate time travel tales, but she carried on so that I bought the book just to shut her up. How good could it be if it had been written over 22 years ago and I'd never heard of it? I had no idea what I was getting myself into. 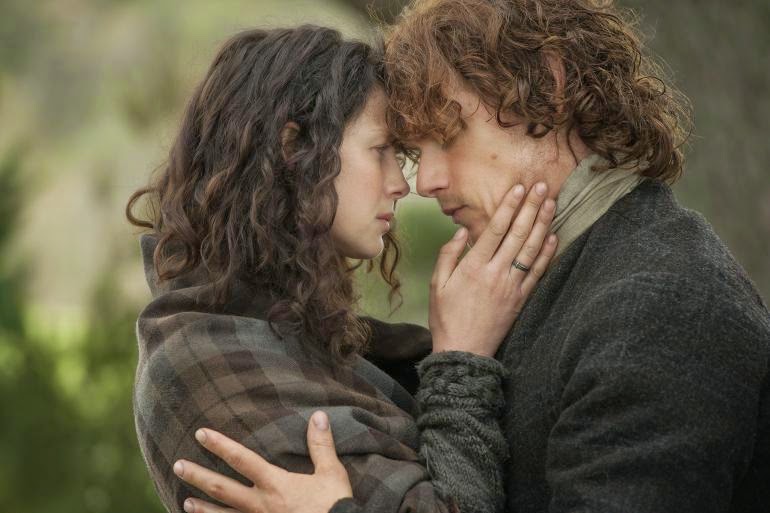 As I became more entangled in the story of Jamie Fraser and Claire Randall, I dreaded reaching the end of Diana Gabaldon's Outlander. Yet I need not have worried...there are 8 books in the series that range from 848 to 1488 pages each. I plowed through them all at a record pace. Much to my delight, I discovered that a television series began last fall on the STARZ channel. I quickly added it to see how disappointed I would be at the small screen version of such a tale. I have watched these first eight shows several times in anticipation of the next new installments that start April 4th. Reading these books has enriched my appreciation for the televised series, which is done very well, indeed. In fact, I plan to read all 8 of the books again, more slowly, to appreciate what I devoured quickly in the first go-round.

This scenario is not always the case.

Not too long ago, I watched the movie Gone Girl.  It was so entertaining and smartly made, that I felt sure the book by Gillian Flynn would be terrific. SO wrong (cue the Debbie Downer music here). After nearly 100 pages - and hating every paragraph - I'm not sure I'll finish it. All I can do is wonder how the book was ever a bestseller. Clearly, I am in the minority here as there are over 37,000 reviews on Amazon with an average rating of 4 out of 5 stars. 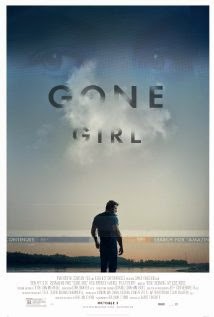 A great book won't always be a great movie, and a mediocre book can be a very good movie. Where do you stand: book or movie first?

(Note that this is a repost from a guest blog on "Girl Who Reads")
Posted by Kathleen Barker at 3:53 PM No comments: