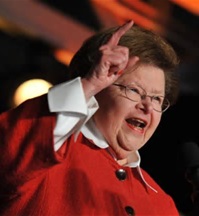 When it comes to politicians, especially career politicians, I have little use for them.  Most are best at keeping power in order to feed at the public trough for a lifetime, sharing little of the average citizen's struggles.  My favorite has always been former Mayor of Baltimore, William Donald Schaefer, who served the citizens of B-town for more than 50 years at both the state and local level.  He loved the city of Baltimore and the State of Maryland with a passion that you either cheered or booed, but his efforts on behalf of the everyday Joe made him a perennial favorite to voters. Yet another is about to join him on the pedestal of honorees - Senator Barbara Mikulski, a small (4'11") yet ferocious woman who has made her way into the history books 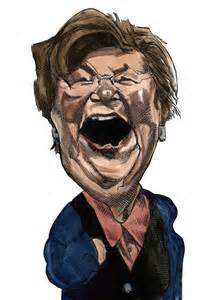 The daughter of a Highlandtown grocer, Mikulski's ear-to-the-ground talent and megaphone mouth gave her grassroots appeal when she blasted onto the scene in the 1960's.  A social worker who was also a community activist, she led the opposition to paving over a giant swath of downtown Baltimore for an interstate highway.  Buoyed by her success, she ran for and was elected to the Baltimore City Council at age 35.  She beat formidable odds to become the first Democratic woman elected to the Senate in 1986. 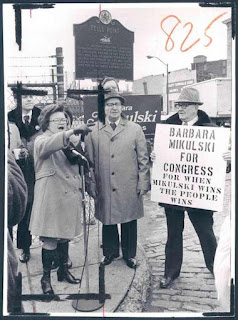 The Fair Pay Act for women would never have made it to President Obama's desk without her.  Mikulski is the longest-serving woman in the U.S. Congress as well as the first woman to chair the House Appropriations Committee.

For all of the groundbreaking factoids, she is my hero for a most important reason:  she comes from an era when politicians actually did things for the people who voted them into office.

I love that she is a graduate of my alma mater, the Institute of Notre Dame.  I love her bulldog-like ability to get things done.  If it's beginning to sound like I'm just another Democratic drum-beater, I am not.  I don't even belong to the Democratic Party.  However, I am an ardent supporter of anyone in office who remembers who she represents.  Mikulski's ex-staff members are strewn about the state in legendary numbers because they failed to live up to her standards of service to the public.  So powerful that Presidents fear getting on her "wrong side", she is the rare exception to the political hacks who are elected with huge PAC funds and corporate contributions.

At 79 years of age, she is not seeking re-election despite the fact that she would surely win again.  I don't begrudge her a more restful lifestyle, but I will miss her tenacious drive and ability to represent the common people of this state as well as showing women everywhere what one small, but loud voice can accomplish.

Thank you, Barbara, for all you have done.  The City of Baltimore, the State of Maryland and the United States of America will miss you.
Posted by Kathleen Barker at 10:16 AM No comments: