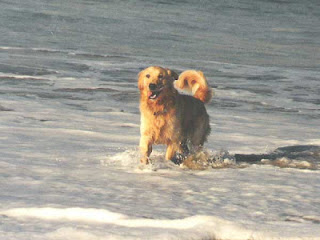 In 1981, I ended a four-year stint in California and moved back to the East Coast.  The Golden State was a remarkably diverse area as long as you had a car to get to the scattered pockets of beauty.  As a young mom of three, I was mostly home-bound except when I escaped to play racquetball at a nearby club or visit the neighborhood park with the kids.  We did make occasional treks to the beach and traveled to several national forests for inexpensive camping trips.  Mostly, they were years spent setting up the collapsible swimming pool in the yard and ferrying the herd to preschool and kindergarten. My one celebrity sighting in four years was "Wrath of Khan" and "Fantasy Island" star, Ricardo Montalban.  So weak.

A couple of weeks ago I redeemed some air miles to purchase a ticket to Los Angeles to help my daughter move into a house not far from where her husband had secured a job.  Moving from Boston to L.A. with two dogs and a 15-month-old is not for the faint of heart.  I arrived the day before the movers pulled up with a few pieces of furniture and a lot of boxes.  When you move that far, it's often cheaper to buy furniture than bring it on the truck.  Most of the first week was spent keeping the little one out of the way and enjoying her calling "Nannniieeee" over and over.  While her parents shopped for inexpensive furniture, I toted my granddaughter in a back carrier and entertained her with repeated rides up and down the store's escalator.  "Up-whee" and "down-whee" she cried, delighted with the new activity.  Rooms began to take shape slowly as we tossed ideas back and forth on how to make improvements without sinking money into a rental property.

By the end of the first week, we were ready to take a break from unpacking and do a bit of exploring.  The pooches hopped into the car with us and we headed to dog-friendly Huntington Beach.  After we lucked out and found a parking space that required a short term loan, I was stunned to see the number of dogs racing around on the beach, bounding into the surf, chasing toys and balls.  Yes, there were some "Marley moments", but for the most part, owners were conscientious about cleaning up after their pets.  We set up a beach tent-shelter because the toddler has decided that she doesn't care for sand.  After a few forays to stick her toes into the water, she settled happily onto the shelter floor, consuming bottles of cold milk interspersed with bing cherries and cheese puffs.

Our next outing was a death march-hike on the Temescal  Ridge near Santa Monica.  I had foolishly pooh-poohed anything shorter, feeling that it wasn't worth a traffic-choked drive that would be longer than the hike.  My daughter wisely packed the baby's lunch just on the chance we would take longer than we planned. Little people with limited language skills don't understand things like "we'll have lunch soon".  After depositing seven dollars to secure a parking space, the hike began pleasantly among the trees that shaded the canyon's entrance.  It wasn't long before I was sweating profusely, praying that each corner of the winding trail would lead to the downward portion of the looped path.  And I wasn't even the one carrying the 40+ pound baby backpack.  Soon I began stopping every fifty feet to catch my breath on the nearly shadeless, rock-strewn trail.  I was reaching the point where I thought I'd have to be air-lifted out of there.  The only thing holding me back was California's dismal fiscal situation.  I'd surely get a bill for about ten grand for their efforts.  The panoramic vistas of the multimillion dollar estates built into the hillside that fell away to the ocean were gorgeous, and occasional puffs of air sliced through the wilting heat.  The baby rode along comfortably on her daddy's back with her bottle of cold milk, shielded with sunblock and a large floppy hat.    I was at the breaking point of the thousand foot ascent when we asked a young couple how much further the blasted waterfall was...and when the trail would begin its promised descent.  "Just ahead," they replied.  We eventually reached the waterfall, reduced to periodic droplets by the drought and began the downward side, pausing every thirty feet to parcel out handfuls of lunch to the baby.  She timed things perfectly, waiting until we released her onto a shaded grassy area at the end to crouch and release her lunch into her diaper.  Smart baby.

Much has changed over the decades as California now seems overcrowded by those seeking its moderate weather and natural beauty.  But one thing has remained the same.  The only celebrity I saw was "Saved by the Bell" and "Extra" star, Mario Lopez.  Still weak.